Live Across The Street From Me! 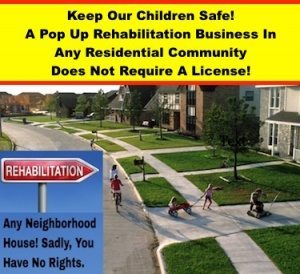 A Group of Heroin Addicts, Alcoholics or Mentally Ill people are moving into the house across the street from me; my girlfriend frustratedly voiced during our lunch together. As I digested her crazed stated, thoughts, questions raced through my mind.

My immediate reply was, “What?!”

Exhaustly my girlfriend conveyed how our community association that prohibits certain types of trees and plants in our backyards yet had no authority over a house rented to addicts or mentally challenged people.

Dumbfounded I listened to my girlfriend as she explained the loophole in the Americans With Disabilities Act and the Federal Fair Housing Act.

The Fair Housing Act considers persons who are recovering from alcohol and drug addiction to be disabled and are protected by the Federal Law.

Interpretation: this loophole enables addicts and the mentally ill to live in any neighborhood.

Sober living homes do not require a license if they house six or fewer residents.

These Halfway House (Businesses) pop up Without Notice in family neighborhoods. The patients in these Rehabilitation Houses are trying to recovery from various types of life-threatening addictions and mental illness: Suicidal Individuals People With Personality Disorders Mental Health Disorder symptoms such as:

Other Rehabilitation House patient include substance abuse addictions such as:

While other Rehabilitation House patients suffer from alcohol addiction.

Dumbfounded I listened to my girlfriend as she explained the loophole in the  Americans With Disabilities Act and the Federal Fair Housing Act. The Fair Housing Act considers persons are recovering from alcohol and drug addiction to be disabled and are protected by the Federal Law.

The Federal Government has laws that prohibit a pedophile from living within proximity to children, schools or playgrounds. Shockingly, the Federal government states it is perfectly acceptable that up to six heroin addicts in a recovery program can be your next door neighbor without a state license. With a state license, a halfway house can service 12 addicts or mentally challenged people.

I was stunned that drug and alcohol recovery are listed as a disability and covered under the Federal Fair Housing Act. I do not understand how the Federal Judges voted to enable drug rehabilitation houses to reside in any neighborhood.

The Federal Judges convey that six or less recovering alcoholics, drug recovery addicts or mentally ill individuals that lived in a house are to be similar to a family.

I feel about the Fair Housing Loophole allows For Profit Business to turn residential rental houses into a profit stream: Rehabilitation Houses Are A Business, and should not be woven into the neighbor landscape. Documents show that when a Rehabilitation House, (also referenced as a Half Way House) springs up in a neighborhood the property value declines.

If an airport, factory or jail were to become your next door neighbor the local community would have input, a voice. The court has written that addicts or mentally ill people in the rehabilitation residency should be considered similar to a family due to a like mind.

I feel contradictory to the view of the court. Addicts usually reside together for less than sixty days in a rehabilitation house.  A majority of families live together for more than 60 days. The frequent coming and going of rehabilitation residences is not similar to a family and creates a transient neighborhood community.  Neighborhood Halfway Houses discourage the innocents of children playing in their front year and riding their bicycles on the street.

The court statement of, ” like mind” is also not in the best interest of most addicts. Alcohol Anonymous along with numerous other addiction groups warn their members not to have relationships with other recovering addicts. Furthermore, not everyone in a family is of “Like Mind”.

A family may consist of people from different religious beliefs, political views, and education levels. Unlike a halfway house a majority of families are fortunate that all family members are not heroin addicts or mentally ill.

If everyone in a household has a similar mental illness or addiction issues, then the family would likely be in crisis. Why would anyone intentional place six or more people that battle crisis in the same house? Similar to most people I believe rehabilitation houses are a terrific concept. However, common sense rules need to apply:

A Washington Post October 3, 2015, article gave an insightful view of  Heroin addicts experiences with rehabilitation houses. The article is sad, alarming and similar to the dozens of other articles I have read about Rehabilitation Houses. The result of halfway houses in densely populated areas causes an increase in crime and property values to decrease.

Sadly, a local San Clemente newspaper offers a candid view of what is it like to live next to one a rehabilitation house the resident heard through an open window graphically crude language from the halfway house. Another time, she said her son was watching television upstairs when her son heard loud vomiting coming from the next store rehab house.

I am sure you are like me, and you are happy these addicts or mentally challenged individuals are trying to recovery and find the correct medical treatment. However, would you want to have ten heroin addicts living ten feet from you?

If the California Rehabilitation House in your neighbor impedes on your quality of life, you can file a complaint with the:

You can also share your Californian voice with The California Department for Fair Employment and Housing. I do not think any government official would like their family to live next door to a Rehabilitation Housing Business.

You can learn more about HypoGal at HypoGal, My Story.

HypoGal shares her shortcuts to living with a chronic illness on her HypoGal Blog.

The HypoGal Website also offers helpful information to those who live with a chronic disease, rare disease, or chronic condition.