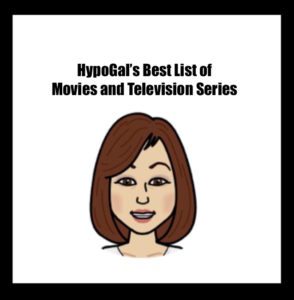 I have found myself watching thousands of hours of television and movies over the years. Life with a chronic illness often leaves me with little options.

I frequently find myself tired but not sleepy, not strong enough to be active, too little cognitive brain function to be social and I just need to relax.

So my chronic illness is how my Love for Apple TV began.

Unfortunately, I realize others need the same option. Numerous people have asked me what movies or television series I have watched.

(Please note the number 10 is my highest ranking and 1 is the lowest.) All the movies and television series are just my opinion. So here it is…

If you have a movie or television series you think others would enjoy, please email me the information to Lisa@HypoGal.com

You can read about additional shortcuts to living with a chronic illness at HypoGal Blog.