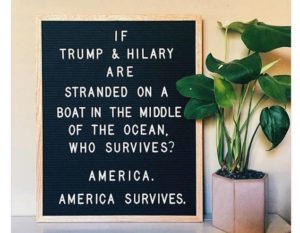 The 58th United States presidential election will occur in several months, November 8th to be exact.

I vote. I have always voted.

Like many Americans, I am a bit taken back by the Republican and Democratic candidates.

I do not like the idea of voting for the candidate I dislike the least.

Both Party’s Presidential candidates do not appear to be trustworthy, honest or to have a moral compass.

Without a doubt, Hilary Clinton is an ambitious, well-read, intelligent woman, who has chosen to devote her life to public service.

Questions linger about her boundaries of power throughout the decades:

Hillary Clinton’s political performance encourages me to welcome the choice of another Presidential running mate.

The choice of Donald Trump alerts me. I absolutely understand how American’s desires change.

I fear the changes America desires will be poorly executed by Donald Trump.

Donald Trump has a history of being overzealous about the ease of his programs.

My partial list of concerns about Donald Trump as our national leader are numerous:

I am not a fan of either of Mrs. Clinton or Mr. Trump.

A President who would simplify our tax code:

The funding of the National Healthcare System would be without the expectation of private business funds.

This is why Election Day, November 8, 2016, causes me to question social rights, taxes and international policy

As the Presidential Election day approaches, I would like to post that I appreciate the democracy of our country, the individuals that give so much to protect our freedom and the right to vote.

You can read my HypoGal Story, HERE.

You can find shortcuts to living with a chronic illness on the HypoGal Blog.