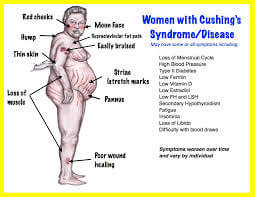 What Is Cushing’s Syndrome?

You being to notice some of the Cushing Syndrome Symptoms:

Cushing’s Disease is the opposite of Adrenal Insufficiency.

The disease Cushing Syndrome occurs when too much cortisol hormone is released into the body. Cushing’s Syndrome may be caused by:

Cushing’s Disease can be a difficult disease to diagnosis and treat. Fortunately, the National Institute Of Health (NIH) recently published the PRKACA enzyme has been linked to severe form of Cushing’s Syndrome.

PRKACA enzyme code is regulated by the PRKAR1A. The PRKAR1A has numerous functions within the metabolism of the cell and had previously been found in a similar form of Cushing’s Syndrome.

You can read more about the National Institute of Health (NIH)article about the PRKACA enzyme at http://www.nih.gov/researchmatters/march2014/03102014cushing.htm