Death From Eosinophilic Esophagitis At Brunch?

As my girlfriend gulps water from her glass after eating a bite of prime rib, I ask are you O.K.?

She nods her head no.

My first instinct is that she must have ate spicy horseradish with her prime rib.

After a few seconds, I realize I am wrong.

My girlfriend is gagging at the table and appears to struggle for air.

Unfortunately, my friend does what many people do when coughing or choking at a table. She gets up from our outside patio table and proceeds to the restroom.

I realize my girlfriend who’s spirit resonates Olympian Athletic must be in trouble for her to leave our Sunday Brunch celebration.

I follow her to the restroom and call her name. She continues to walk towards the restroom but turns her head towards me.

I look at her face and I feel helpless. I am helpless. I feel like I am in slow motion and it is a surreal moment as I shout her husband’s name and ask the front desk to dial 911.

I pace like a duck with its head cut off as customers jump to her aid. Thankfully, many patrons of O’Neil’s Restaurant have CPR training.

The color change in my girlfriend’s face makes it apparent time is of the essence. The seconds seem like hours as a man tries to help her by administrating the Heimlich Maneuver.

The Heimlich Maneuver does not appear successful, and another man tries to open her airway with his fingers.

Between the two men, the latter being my girlfriend’s husband hope arrives.

My friend begins to throw up blood. A stream of bright red blood sprays from my friend’s mouth and across the restaurant’s garden.

As blood sprays from her mouth color comes back to her face.

My girlfriend ends up in O’Neil’s restroom with the Paramedics at her side.

As minutes pass so does the food that is impacted in my girlfriend’s Esophagitis.

It has been years, but my friend realizes her rare disease, Eosinophilic Esophagitis EoE is back and screams her full attention.

What Is Eosinophilic Esophagitis (EoE)? 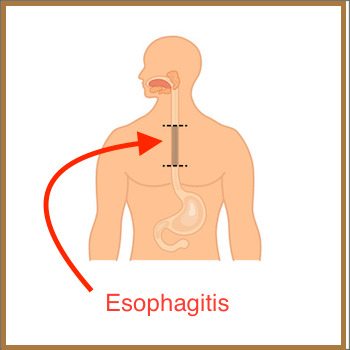 The tube shape Esophagitis connects the mouth to the stomach.

Eosinophilic Esophagitis happens when a particular type of white blood cells, the eosinophil, accumulate in the Esophagitis.

Eosinophils production and accumulation may be caused by:

Some individuals with this EOE have been found to have an unusually high expression of a particular gene called eotaxin-3.

The gene code eotaxin-3 is a protein that is important in controlling the accumulation of eosinophils.

Eosinophilic esophagitis can run in families, but the risk for additional families members is <5% unless they are twins with the EoE patient.

The increase of eosinophils cells causes injury and inflammation to the esophagus.

What Type Of Damage Does Eosinophilic Esophagitis Cause?

The damage to the Esophagitis from Eosinophilic may:

The esophagus may become narrow from inflammation. A narrow Esophagus may cause food to become impacted (stick to the Esophagus).

When food sticks or becomes trapped inside the Esophagus, this creates a medical emergency.

What are the symptoms of Eosinophilic Esophagitis (EOE)?

Symptoms of EoE may vary from one individual to the next. Age also plays a role in communicating symptoms.

Common symptoms of Eosinophilic Esophagitis include:

I hope this HypoGal Blog post, Death From Eosinophilic Esophagitis At Brunch has been insightful.

You can find additional shortcuts to living with a chronic illness at HypoGal Blog.